Modular origami is a technique in which two or more sheets of paper are folded into units or modules. The units are then fitted together to form one larger piece.

The origami piece shown in the photo is reminiscent of both a lily and a star. Designed by Leonor Martínez (Colombia), this is a charming example of modular origami.

This particular origami Lily Star is made with eight modules. To make the units you must use eight square pieces of paper measuring 3 x 3 inches (7.5 x 7.5 cm). Duo color paper is best.
Here are video instructions to make the origami Lily Star (designer Leonor Martínez).

Each module is made from the simple origami kite base.  I recommend using clips or miniature clothes pins to hold the modules in place during assembly. If you need to handle these origami lilies a lot, I suggest putting a drop of glue between the modules to prevent the petals from coming undone.

These modular flowers look great when used as candle holders (Do NOT leave them unattended!)

Modular origami figures turn out beautifully if made with paper squares cut from similar pages of a catalog or brochure.

It will be necessary then to have a sufficient number of copies of a given catalog or brochure to yield the required number of identically patterned paper squares. Rotated repetition of the pattern will give the finished model a kaleidoscopic look. The photo shows an example of identical pages from outdated catalogs used to make this modular origami lily.  Click on the image to view it larger. 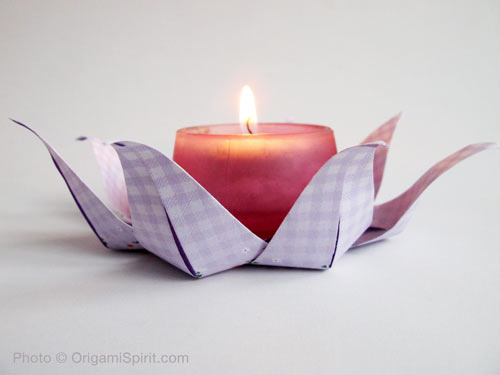 Next post: An Origami Snake to Celebrate the Chinese Year of the Snake

Previous post: A Definition of Art and What Being an Artist Means