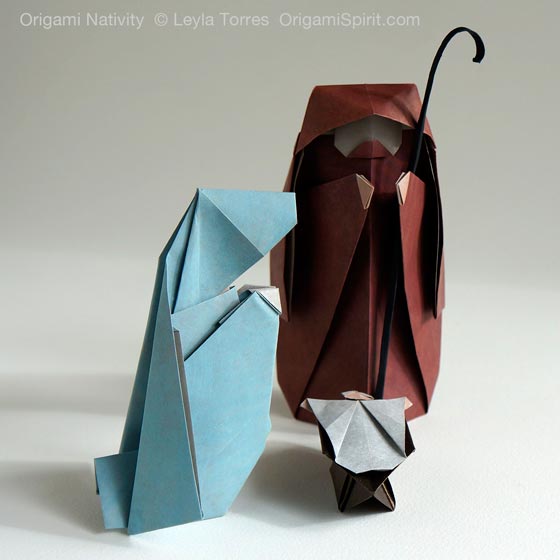 These figures of the child and crib are part of the origami Nativity Scene series. In two previous posts I’ve shown how to make the figure of Joseph and his staff,  and Mary.

In my native Colombia the tradition is that baby Jesus is the one who brings the Christmas presents. I remember one particular Christmas when I was only four years old. I woke up early that day and there it was, perched at the foot of my bed: a large red tricycle, my present that year from Baby Jesus.

My father placed the tricycle on the floor and sat awkwardly on the seat. His big feet scrunched up on the pedals, his knees almost touching his ears. I’ve never forgotten that Christmas, my Dad showing me how to ride a tricycle. It’s a warm and cozy memory that I’ll never forget.

Here is the video tutorial to make this origami baby Jesus and crib. I hope making this Sacred Family in origami contributes to your own warm memories of Christmas!

The following videos will show you how to make the other figures of the Nativity Scene:

If you like what you find here at Origami Spirit,
please support our work with a donation.
Whatever the amount, we appreciate your helping us
to continue providing you with quality origami content and video tutorials.

7 thoughts on “How to Make an Origami Nativity Scene: The Child –Part 3 of 3”