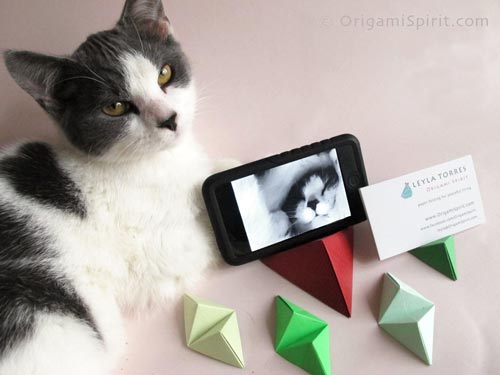 Have you ever been adopted by a cat?  A few days ago a little cat appeared at our doorstep. My husband and I  walked around our neighborhood going from house to house looking for her owner. Nobody claimed her.

Since she has these lovely heart-shaped markings we decided that while she stays with us (be it 24 hours or 24 years), we will call her “Corazón”, which is the Spanish word for heart.

As I prepared a video for the iphone/business card stand, Corazón stepped delicately around my desk and sat next to the stand holding the iPod with her photograph on the screen. She has made it clear that she wishes to take center stage in our home and is indeed ‘The Queen of Hearts’!

Today Corazón is the master of ceremonies and happy to introduce this video, with instructions, for folding a double-pyramid origami stand.

David Donahue (USA) designed this model, and later on he found out that the piece had been independently developed by Kunihiko Kasahara as a connecting unit for a modular figure.

David’s contribution, beside the fact that he discovered the double pyramid on his own, is in realizing different perspectives for the same model. On David’s Flickr page we can see some of his other creative variations and ideas for using this origami figure. Bravo David!

I used green and red paper and followed David’s suggestions on how to make a duo-color double pyramid to make myself a pair of earrings to wear on Christmas Eve –watch the video to see this variation as well. I’ll have to hide the earrings from Corazón before she decides they are her newest toy! Stay tuned for my next video. It will feature a figure based on a similar folding principle as the double pyramid, but will be of a different subject!

If you haven’t yet, click here to subscribe to Origami Spirit
and receive coming posts via e-mail.

Previous post: How to Make an Origami Santa Gift Box