Santa Claus, the beloved character for children at Christmas and for origami creators! I’ve featured a few Origami Santas in Origami Spirit before.

As I was playing with David Brill’s star box, presented on the previous post, it occurred to me to transform his star box into this Star Santa simply by adding a beard.

Some origami purists might cringe at the thought of using a drop of glue to make this origami Santa, but I was assured by some close friends that occasionally, and only occasionally, we might turn away from our purist origami selves, and indulge in the pursuit of creativity, and cuteness ;-)

“If you are able to set aside taboos regarding origami, such as those against cutting, painting and gluing, new horizons will begin to open in the origami heavens”
~Kunihiko Kasahara (In his book Extreme Origami)

So in this video tutorial I show what to add to the basic star to turn it into a Star Santa.

Tips and suggestions for making the origami Santa Star Box

The Star Santa is based on this pentagonal star. 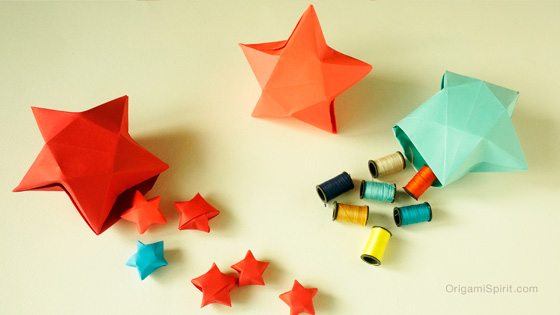 3 thoughts on “Origami Santa Claus -It’s a Star and a Christmas Box Too!”